The day started at 7:00am for breakfast where we had cold potatoes and sausages. Jack and I couldn’t have been happier with a “I really enjoy this coffee” from Jack and I felt the tea with a splash of milk and sugar was too good to be true.

We then set off with everyone feeling a little sleepy from the trip in general. I must admit I felt pretty exhausted and was not overly excited for the day ahead, which in hindsight would soon change.

We picked up Leslie, a Canadian who saw interest in Uganda and decided to bring her life over here. This was a huge decision and now with a 6 year old son, she couldn’t be happier with how things turned out. She runs charities such as ‘hopeline’ where the money is given to the community through local leaders such as Tony.

We picked Tony up and he told us his story. He had a particularly troubled childhood and has done an incredible job in succeeding in life despite the hardship. Tony’s mother passed away when he was 7 years old and his father was bedridden at the time. Tony being the oldest of 4, knew he had to work in order to put food on the table and look after his father. He started as a brick maker at the age of 11 and after several years he became a car washer. It was while Tony was working as a car washer that he had a chance encounter with his uncle, his fathers brother. Tony’s father hadn’t stayed in contact with his brother. His uncle said he’d like to help him go to school, this was only the beginning as Tony then continued onto University where he studied economics. It was inspiring to see that the hard work and dedication from Tony and Leslie has payed off, they are true heros of the community.

We travelled to the village where Tony’s mother had passed away. Tony has set up a community of women who left their husbands to have a better and more knowledgeable life, as many women in Uganda are suppressed by their husbands and are not able to have an education. These women are educated on how to earn a living for themselves, for example making jewellery and mats.

The first stage of the day was singing and dancing, which completely flipped the switch for me as I was now more ready for the day and more awake. During the dancing Jonty was channelling his inner ‘Austin Powers’ and put a smile on everyones face with some moves that would put John Travolta to shame. The women then introduced themselves, some of the important messages were that more than 80 percent of these women had more than 4 children with 1 of them having 16. Another interesting point was that most of these women were older than 50 years old, this shocked me as before the day began I thought most of these women would be young.

Our next move was to tour the village, we were all partnered with one community member and we started the 2 kilometre round trip. Jack and I started with the questions, such as “how much time would it take to get water” which offered confusion to our partners and a few laughs and then later a tap on the wrist from Jack with a repeat of “time, the time” which gained no ground. However we were just happy to interact with the women and learn many words in Ugandan for everyday fruits, such as bananas, avocados, sweet potatoes, dogs, cats, pigs, goats, cows and many more. As we arrived back we were asked to help the women make mats using beads, this required a lot of concentration and Jack, Megan and I excelled in it.

The next part of the day was helping make banana pancakes. They were rolled out and cut into shape by everyone but myself, as after a couple goes I was disqualified for basically being useless at it. I’m not a huge fan of bananas but I was pleasantly surprised when they started looking like donuts and I thought, ‘oh yes, I can manage a few of those’ which I did and I think my mum would be incredibly surprised as I continued to eat three more in the car ride back to the hotel.

Jack and I of course having the mind of young children, our attention turned to the three young boys who were playing on the road. It started by throwing a tyre around and progressed to tree climbing. We were quick to realise we needed a bigger and more challenging tree, Jack had his eyes set on a tree on the other side of the garden. With the oldest boy leading, he climbed very quickly up this challenging tree, Jack was to follow and sadly couldn’t make it all the way up. I was next, I started my way up the tree and due to my jaw dropping athletic ability I was able to make it up and down the tree, a true spectacle of the human race at its finest.

We decided to give the boys some cricket gear, we taught them how to play cricket to the best of our ability with Jack leading the pack. After a couple shocking throws from my end, I decided if I was to teach these kids my cricketing ability it would definitely lead to bad habits so I tried to stay out of it.

After some more horsing around we went back to the house, with Jonty having a little afternoon nap while we were busy climbing trees. The group sung two goodbye songs to us, it didn’t take long before myself and Jonty were up dancing and shortly afterwards getting everyone in the group to start dancing as well. It was such a great way to end our visit.

Although I started the day with a negative mindset, being greeted with such love and compassion eased my discomfort and made the conversation with these beautiful people easy. I felt the importance of just being able to have a conversation and to dance, if you can call what we are doing dancing. The day was an amazing experience that I will not be forgetting any time soon.

This visit showed me how powerful and loving a mother can be when they take their life into their own hands and from today I have gained such respect for not only women with children but women in general. Of course I would like to mention my mother and thank her for giving me the opportunities and the love and support that has never wavered, it can’t be easier being a mother and it definitely can’t be easy being mine. I couldn’t have asked for a better mother, I thank you and love you for it. 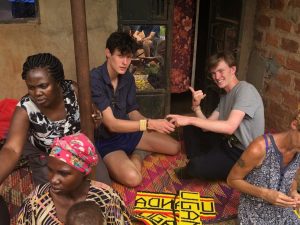 Jack and Barnaby excelling at beading

The boys with their new cricket gear 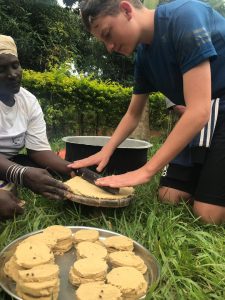 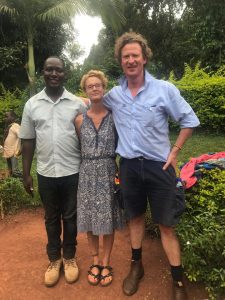 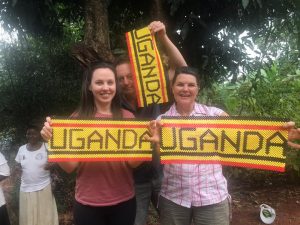 Megan, Micheal and Trish with their new mats. 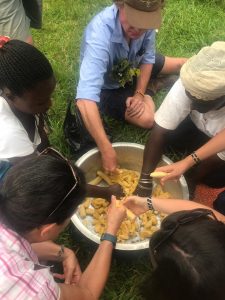