The day commenced with an uninvited 6am wake up call from Jonty basically ordering me to get out of bed and join himself and Barnaby for a run. Once the run was finished Barnaby and Jonty joined Trish by the pool for some planking challenges, which by the looks of it had Jonty shaking terribly throughout the entire challenge. We were told to meet down in the carpark by 9am, similarly to that of the other mornings. So the team all had their own breakfasts and sorted out their own packing for the day, and we set of for our first stop at the Happy Hour primary school. This began with an extremely warm welcome from the kids, forming something resembling a guard of honour, additionally each of the team members were handed out a posie of flowers.

We were then lead to the staging area complete with tents for cover and chairs for the team as well as the 430 students at the school. Once the team was seated and ready to listen to Mike, the headmaster of the school, he addressed us and introduced the team to the students and their parents.

Following the conclusion of the introductory speeches the team was shown around the school and revealed to all the various farming techniques, these ranged from having each primary class take care of a garden bed and even being given a tour of the greenhouse and piggery situated within the school.

Concluding the tour of the school we were once again seated under the tents, and then were treated to an array of different performances. These performances ranged from creative dances, which were choreographed by the kids themselves, as well as there were songs performed by the school choir, debates held between students and they finished with a traditional native dance. Although this dance took an unforeseen turn as the dancers performing it encouraged us to come up and do our best to dance with them.

Once this was completed we had some free times with the kids, from this we gave them the soccer balls, tennis balls and bubbles which they all absolutely loved. As well as this, the kids took a great fascination in touching me and Barnaby’s skin as it turned white when pressing on it. There was also a Q and A conducted which gave us and the kids an opportunity to enquire about anything we didn’t know beforehand. But within this Q and A the kids were content on thinking that Barnaby and I were twins, the teachers also thought this as well. But as the day wound down we had to leave Happy Hour primary school. As we drove off to the next school the kids would wave goodbye all stationed along the driveway entrance.

As we departed from Happy Hour primary school we were slightly anxious for our next school, Kyassonko primary school, due to the fact that we were over an hour and a half late. These fears were further realised as we came across a sign at the driveway entrance nailed into a tree reading “avoiding being late”. But the teachers nor the students seemed too fussed with our late antics. We began our experience with this school via a tour of the school showing all the fruits and vegetables and revealing all of the Landcare techniques used, for example the piggery used and the rain water tanks donated by the Kain Foundation.

Following the tour, we were treated to some entertainment similar to that of the previous school although this school had the national anthem, district anthem and East African anthem. Additionally we were called up to sing and dance with the children once again, but in this dance we saw the rhythm increase rapidly which consequently saw Jonty fall on the ground from exhaustion due to it.

Once the entertainment was finished we gave our our gifts of soccer balls, tennis balls and the bubbles. Although on the lead up to giving the children the soccer ball we had to have Zac have the ball tucked under his shirt which wasn’t quite as discreet as we would’ve hoped as the kids quickly caught on and swarmed Zac. When we eventually gave the ball to the kids they absolutely loved it. Zac kicked the ball in the air and had every single kid swarm the ball giving us absolutely no room to move and no chance to play a proper game. Although we still had an absolute blast all the same. This was very short lived though, due to the fact that we arrived late, so due to this we gave the teachers the ball to distribute as they thought accordingly.

Although it was great to give the kids the ball it also meant a close to our day of touring the schools. The kids waved us off goodbye along with a plethora of high fives and fist bumps, courtesy of Barnaby, Zac and myself. The day really did open my eyes to fully comprehend the impact that can be had from outside parties such as Landcare and the Kain Foundation. 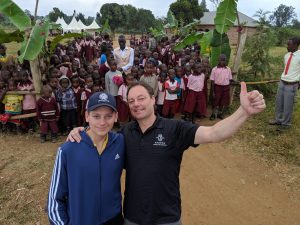 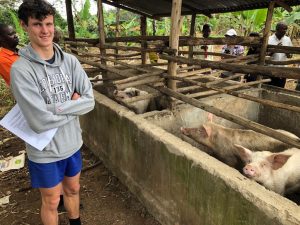 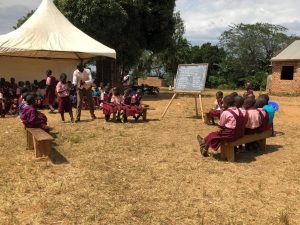 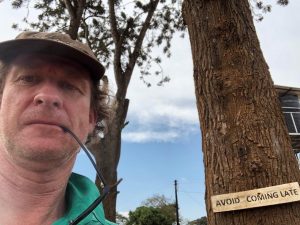