Big day today with an all day visit to a brand new Landcare school, St Maria Gorreth Mpugwe Primary School.  Got off to a slow start with a stop at a motorcycle repair shop to pump up 2 footballs balls and a soccer ball as the pumps from Oz failed.  We had barely finished ‘Islands in the Stream’ when we arrived at the school.  We were each given a bunch of flowers, serenaded with the ‘Welcome Song’ and Jonty was honoured with cutting the ribbon at the school entrance.  We felt a like royalty and quite undeserving of all the fuss but they had obviously been to immense trouble.

The kids looked great in their pink uniforms and big smiles.  Jonty and Barnaby joined in drumming and then we were ushered by the principal, Francis, to a classroom lined with drawings by the kids showing how well the practical Landcare principles are being translated into learning.

The tour moved to the gardens which utilised recycled and organic materials, terracing and capturing water in the most efficient way.  This involved an entourage of the school committee, school inspector, the principal, a photographer and some kids; all were dressed to the hilt.

They have a great seedling nursery where they raise plants for kids to take home and for use by the school.  We visited the chickens and pigs which were very well catered to and their manure is also utilised in soil enrichment. Also visited a nearby property in which the community could participate in learning about Landcare principles.

Arriving back at the oval for snacks the whole school was present on the oval and we received a rousing welcome.  We were installed as guests of honour under the marquee and felt rather like undeserving celebrities.

Everything was beautifully decorated and choreographed just for us and then food and drinks were brought to us.  The entertainment was provided by the kids who were amazing dancers, Jonty was not, but he did try hard and amused the audience no end.  There was much energetic dancing and other entertainment, then speeches which went on for some time.  We then planted a tree each with some P1 children so they can look after them throughout their school years and to remember our visit.  So touching.

We were then let loose with the kids.  Megan disappearing in a sea of kids when brought out the bubbles, Barnaby and Jack were like Pied Pipers with a mass of kids following them and their weird dance moves everywhere.

The planned soccer match was impossible as there were about 200 kids, 2 footballs and a soccer ball against us.  I had some very interesting conversations with many kids who were super curious and ended up with the cutest little tacker attached to me for the last hour or so.  The kids are simply so joyous, curious and grateful.  The day closed with Jonty leading some games of ‘What’s the Time Mr Wolf’  whilst Jack and Barnaby led the kids in a rousing rendition of the ‘Saints Chant’.  A gift to Uganda!

The night finished at the Pork Joint with warm beer shared with Landcare committee members and interested parties.  On return to the Hotel the ‘Great Uno Championship of 2019’ commenced.

All in all a very emotional, fulfilling day: one in which Megan and I were both brought to tears at various points.  So many great caring people looking out for the future; feeling happy for tomorrow. 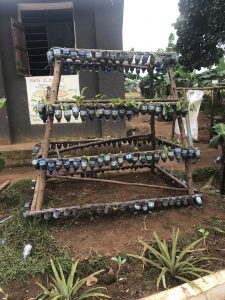 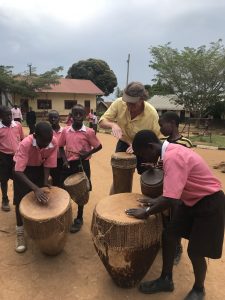 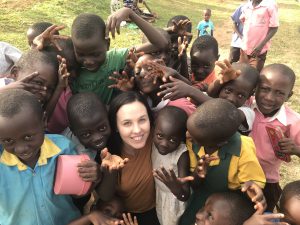 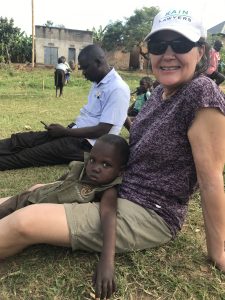 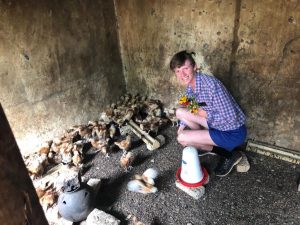