Today was our second visit to Kkoba village for the Kkoba Community Projects that Kain Foundation sponsors through partnership with Hopeline Organisation and The Real Uganda.

We started the day of with some of the team having the traditional Rolex (chapatti wrap with egg omelette inside) for breakfast, we then boarded the bus and headed to Kkoba this trip is only about 45 minutes but takes about two and half hours to get there. Along the way we picked up Leslie and Tony who run Kkoba Community Project. They are both fantastic have so much knowledge of the place that it’s interesting to just sit and listen to them talk.

Day two at Kkoba was finally about getting our hands dirty and being able to help with moving the bricks and planting some trees so they can start building the nursery part of the new school. The school is in progress of being built and in the twelve months since the last team visited the area we learnt that they have cleared the area and have already started building the primary part of the school. Amazing what difference 12 months can make. The school does have a long way to go but it is going to be fantastic for these students and should also encourage more children to attend as they will have a lot more room to house them.

We formed a human chain and moved the bricks from further down the field to closer to the area marked for the new building. This made it a lot easier for the men to start laying them. We then was able to watch as they mixed the cement set up their straight lines and started to lay the bricks. 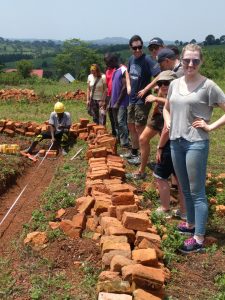 Once we completed our work when then boarded the bus to a village called Myendo. This is the village that Tony first worked in and we were greeted with songs and dancing. Tony had explained earlier that he chose to work first in Myendo rather than his own home village of Kkoba as he needed to get a win on the board and demonstrate success before the people in his village would accept his proposal to run projects in his own village.  The women of Myendo were so happy to see us we were given hugs and wraps where put around us so we could join in on the dancing and welcomed into their home. There was no hiding in the back as they had us all dancing. 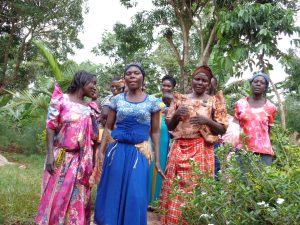 This is where we were to have our lunch. This was just like the other village lunches that we have had this week, which consisted of rice, beans, cabbage and spinach. The women had prepared this with lots of love and care but those that know me know that the village lunches have been a struggle for me.  The rest of the team seems to have really enjoyed them.

After lunch we treated to some more singing and thanking us for coming to their home. It was actually our pleasure to be there and be welcomed into their home.

Now it was time to start heading home. We thought today we would stop of on the way home for tea as the traffic is horrendous over here and takes so long to get anywhere. So we stopped at a place called Olive and to my surprise they had the best pizza I have ever tasted. I was in heaven pizza and Coke for tea.

We thought by stopping for tea that the traffic might have eased; how wrong we were. For a trip that on Lisa’s Google maps showed 20 minutes took us 1 hour to get home. We came to an intersection that it was like playing dominoes with the cars and motor bikes there does not seem to be any road rules, but Remmy with his coolness and patience managed to get us out of their and on the way home. Normally these longs trips in the bus give me time for reflection and looking out the window and just see how the Ugandans live but this traffic tonight was like nothing we had ever seen.

This trip for me has certainly been a challenge and an eye-opener but it has also been the most rewarding trip you could ever possible do. Just to see the smiles on the kid’s faces that we have visited just melts you’re heart. We say they have nothing but they are so happy but as Leslie pointed out to us why don’t they have the choices like every other child. These kids are running around bare foot over rocky paths/roads all day and there is not one of them complaining. They have very little to eat maybe one meal a day and sometimes not even clean water. Something my children are so lucky to never have experienced.

I would like to thank Lisa and the Kain Foundation for this unforgettable experience as I don’t think it something that you can ever forget. I would like to thank the rest of the team Evan, Michael, Scott, Nick, Maddie and of course Lisa. As travelling not knowing anyone has been hard but you guys have been fantastic,

Last but not least I would like to thank my work Halpin Financial Services for giving me this opportunity and I encourage any of my work colleagues to take on this challenge. 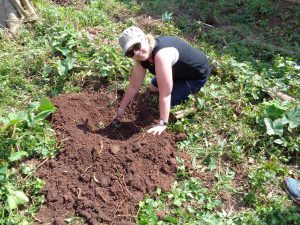