I have been enjoying the hotels’ buffet breakfasts so far and today was no exception.  Along with some traditional Ugandan dishes, this time I noticed a plate of sausage rolls.  Unexpected but I wasn’t going to pass them over.

After breakfast, we were to be in the van by 9am to visit 2 schools; Kagganda Primary School and Kaboyo Primary School. At the first school, we were greeted by a crowd of students at the gate and traditional dancing to take us onto the school grounds. The assistant head teacher Flavia took us into the small headmaster’s office for a short introduction where we could all barely fit. Then we toured around the school, looking at all of the progress that they had made with the help of the Junior Landcare Project.

After all the important duties, we then listened to a few speeches and had to show the school kids up with our groovy dance moves. After demolishing the school students in the dance competition, we were able to play the school’s 11 finest soccer players in a short match.

Before the Nation v Nation game could start, both teams had to line up at the centre of the pitch to sing the national anthems in front of a crowd of over 300. The students had the home ground advantage, and the pitch sloped down on their side. Even with these strong disadvantages we managed to tie the game up to 3 all at full time leaving it to penalty shootouts. Both teams scored the first 3 goals and Jonty was next to shoot. He was quick to point out possible hazards on the pitch, removing a few dead leaves and kids out his way. He took his time lining up the perfect shot right into the corner of the goals, pointing out the spot. With an almighty strike the ball fell right into the keeper’s arms. With the home team in the lead, Barnaby and Jack begged one of them to miss their shot and they politely obliged. He shot a screamer directly left of the goals hitting a child in the face… He was down for a few minutes but when he got up, he was smothered with gifts from the Mzungu; a soccer ball, handball, Barney’s glasses, a Milo bar and a bottle.  Not a bad compromise for the pain.  An unhappy ending to a fun game of soccer leaving the game tied.

After the game finished, we headed back to the ‘Tourist Van’ to see a group of girls holding up weaved mats they made for us. There was one for everyone for a low cost of 5000 shillings each. Unfortunately there were a few spelling mistakes.  The funniest was Barnaby’s, where they spelt his name ‘Pyrl Barnby.’

The second School was only a five minute drive away. It was very different from the first school as for once we weren’t greeted at the gate. The head teacher Charles took us into his office for a brief introduction, we then went straight to lunch for another buffet style meal with two types of rice and your standard matoke.

After lunch, we had a tour of the school and noticed they were set up pretty well. They had water tanks, a large nursery, a water well and a lot of land. Although the teachers quarters were very drab being mud brick houses with no electricity. After all the nitty gritty stuff we finally got down to business… The soccer game. They had a full size pitch and lots of their players were quite intimidating, wearing soccer guernseys and boots. So we decided it would be best to split the Mzungu and their players to make two even teams. Trish and Megan opted for netball and had a great time.  They had lots of willing players.  Martin their soccer coach joined in as well as Charles the headmaster proving to be the most popular player on the field. Every time Charles would go for a kick the crowd would go wild! The end score was also a draw at 1 all.

We met up with Matthias for dinner along with Joy acting head of Landcare. She was educated in the UK and has a PhD and it was evident that she was very passionate about Uganda and optimising the impact of the projects for better outcomes for its’ people. After dinner at around 10pm, Dad and I went off to bed whilst a few others stayed out a bit later.  As I was not in attendance it is not my role to speculate what took place but it may have involved ABBA and Dolly Parton. 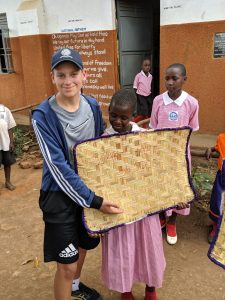 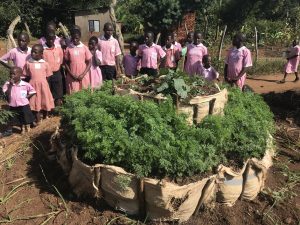 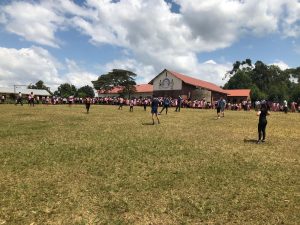