Our final day was spent in Kkoba, where we have worked with The Real Uganda and Hopeline Organisation to run family workshops (to reduce domestic violence, alcohol abuse and other anti-social practices), promote economic development (through ag trading enterprises) and build a new school using the proceeds of that economic activity. The material fruits of this project are evident when comparing the infrastructure of the existing schools with that of the new school which has been built and is expected to open in 2020. Perhaps more startling is the non material fruits. The Kkoba community has historically suffered the loss of a dozen or more children per year being abducted and not returned. With a more engaged and structured community the abductions have almost been eliminated.

On the sporting front, we had become a little despondent with our apparent lack of success in football proselytising here in Uganda. Despite delivering a number of footballs and “football clinics” to each of our schools, most students were still electing to header the pill rather than mark the high balls we kicked to them in games of marks up. We had all but given up hope of any Aussie Rules impact here until today we arrived at Kkoba village in remote Eastern Uganda where we have built a school and run some other community programs. Jack and I are massive Bombers fans, so imagine our absolute delight when, from some distance, Jack spotted a gentleman in the Main Street of Kkoba wearing a shirt sporting a Bombers logo. Not only was the gentleman wearing a Bombers polo shirt (circa 2005 edition) but his name was Irving! Indeed Irving was the only English word which he could say. We ran Irving through a few drills and departed leaving him with an Aussie Rules football. Irving was last seen bouncing his football, with minimal success, in the Main Street of Kkoba!! Perhaps there is some hope for Aussie Rules in rural Uganda after all. 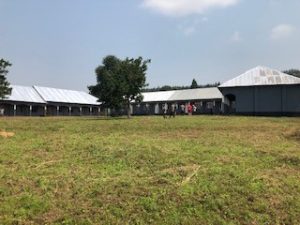 The new school in Kkoba 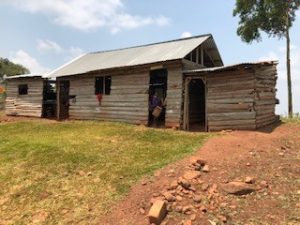 The existing school in Kkoba 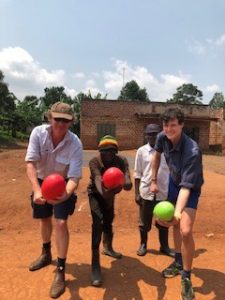 Jonty and Jack teaching Irving how to handball