Awake 530 sharp as the call to prayer rang out somewhere near by.  Uganda is 84 percent Christian and Islam a minority at 14 percent.  Loaded up our van which is accurately emblazoned “tourist van” on all sides.  Weaved our way to subbi and the watoto project.  Tour of the nursery which can cater for 100 from newborn until toddler stage.  Only had 64 at present as they sometimes have to take 20 babies if another centre is shut down.  Heard the story of quadruplets whose mother died during childbirth.  3 survived and the middle one Ambrose is a character determined to make something of the opportunity he has been given to have a life.  At age 6 he demanded everyone call him doctor Ambrose as he wanted to be a doctor but now he insists on being called president Ambrose!  Amazed at how well organised and thought out the program is and the process of transferring the kids to a home with up to 7 others.  Further how they go to huge effort to place the child at any appropriate stage to any biological family.  So much different to what I had assumed – a total emphasis on ensuring the child is supported and raised as a well adjusted citizen capable of fulfilling their potential.

The watoto school through to year 12 has a focus not only on academic but also vocational pursuits as evidenced by Barnaby’s new hairstyle!  Lunch was in the house the foundation built and we also got to see the two other buildings.  We were graciously hosted by two housemothers, the most gentle and compassionate people making such a difference.  They get 2 days a month to leave to see their own families as most of them are widows with grown up children.

An impromptu soccer game was on with approximately 30 young lads with boundless energy.  One that came up to Zach at the start asked for Zach’s name.  Some 2 hours later as we had finalised our visit the same young lad came running up as we boarded the bus “goodbye Zach, pleased to meet you”…and we were off.

Dinner, a spirited game of practice Uno to align on rules ensued.  Barnaby who is the card shark in his family nonetheless finished last and whilst grateful it was practice for the real deal tomorrow night headed off to the gym to exorcise the losing demons.

In closing, to quote one of the signs in the group homes – if others can, why not me. 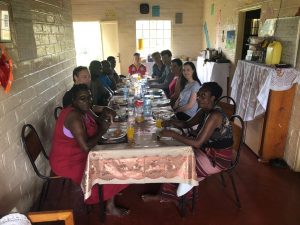 Lunch with the two housemothers 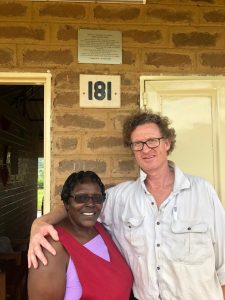 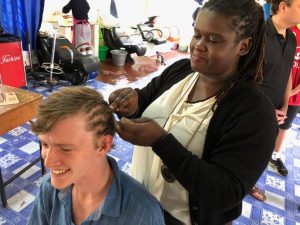 Barnaby getting his hair done